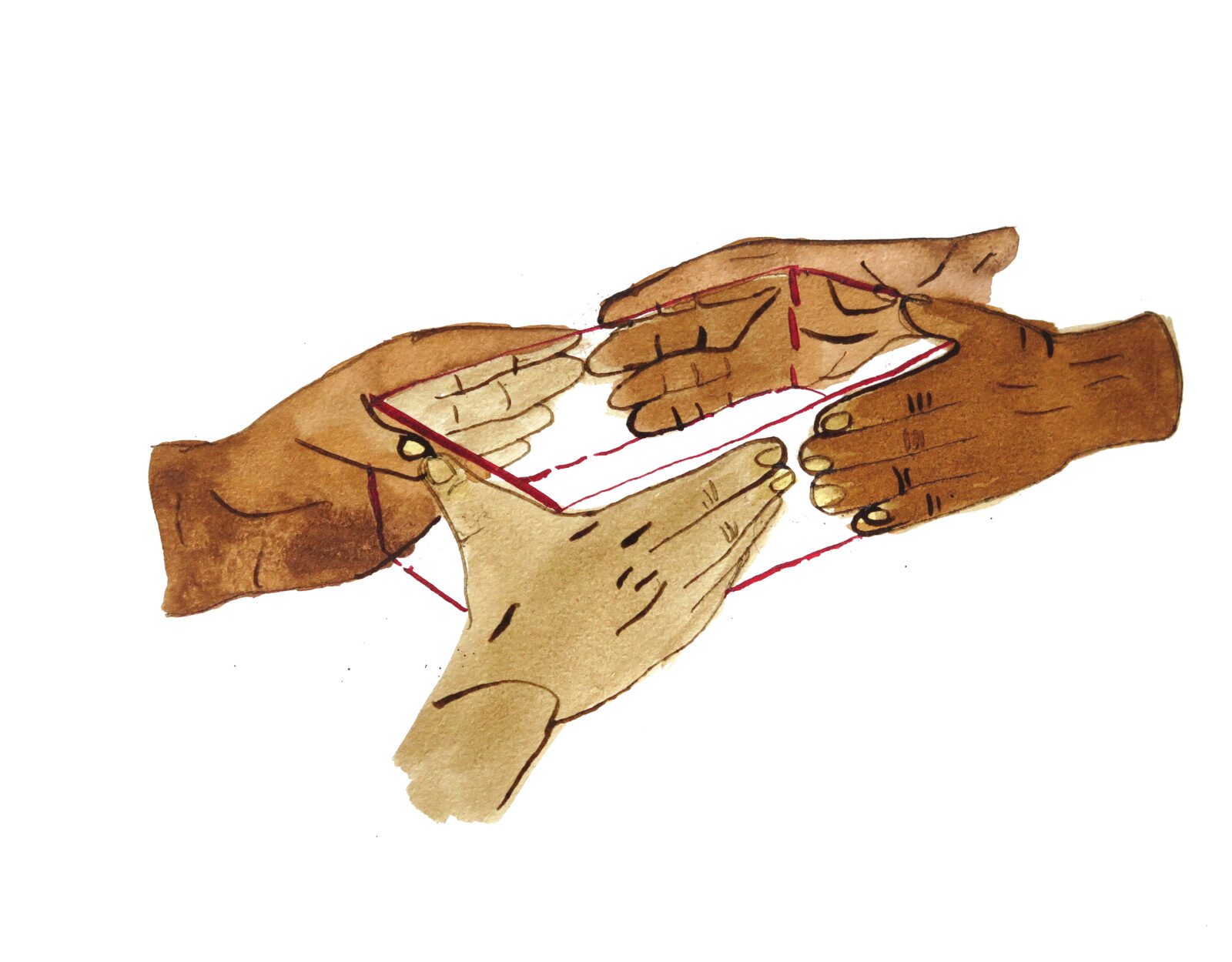 Parasol unit foundation for contemporary art presents as the final exhibition in its current London space, works by French artist Christine Rebet. This, her first solo show in the United Kingdom, will occupy two floors of the gallery and comprise six hand-drawn animated films that address the traumas of personal and collective histories, illusion and the destruction of our shared history and environment.

Drawing is at the heart of Rebet’s practice, which she often develops into animated films, sculpture, installations or performance art. With a background in theatre design, Rebet presents many of her animated films within custom-built spaces and installed together with props to create an immersive environment. Working with the traditional techniques of early animation she explores the unconscious and creates tales that are both anti-heroic and satirical.

One of Rebet’s earliest animated works Brand Band News, 2005, previously screened at Parasol unit in the 2007 group exhibition Momentary Momentum: Animated Drawings, is presented as a ballad of transformation which examines the phenomenon of renewal and the quest for identity. Playing to the soundtrack of ‘Bullet Sisters’, a song written by Rebet and her brother, the film takes on a dreamlike yet macabre quality as a sequence of events unfold, beginning with two sisters who after being shot dead then hitch-hike to seek out a new life. In this film, Rebet explores the stylistic and musical approach of early cartoons and their ability to activate endless fantastical imagery which in some ways emulates today’s access to the abundance of images available on the internet.

Rebet’s dark yet whimsical film The Black Cabinet, 2007, a two-screen animation set in a nineteenth-century parlour, deals with themes of trickery, illusion and political propaganda. It features a group of aristocrats conjuring spirits during a séance – one bearing an uncanny resemblance to Mussolini. Rebet allows temporalities to collide, as these are clearly not ghosts from the past but a sombre prediction of what has yet to come.

Inspired by Samuel Beckett’s 1981 quadrilateral ballet Quad, Rebet created The Square, 2011, as a direct response to the collective protests and social unrest in public squares in Egypt and the Middle East during the Arab Spring uprisings in 2011, the year after Rebet had visited the region. In this film, Beckett’s four performers are replaced by different coloured powdered particles of wood, metal, plaster and clay that shuffle about in a similar pattern, in and around a square, always avoiding the centre. The repeated motion eventually shatters the square’s surface, evoking uprisings in this part of the world and elsewhere. These revolts revived the function of the public square as an important gathering place for citizens and demonstrated how powerful yet invisible communication networks increased social consensus and organised political collectives that are no longer controlled by an established centre of leadership but rather by autonomous actions.

In the Soldier’s Head, 2015, is based on the story of Rebet’s own father who, having been a soldier in the Algerian War, suffered from post-traumatic stress disorder. It presents an intensely personal perspective on historical traumas and flows like the delusions conjured by a young soldier. A process of filming images submerged in water causes a series of ink drawings to emerge, expand and subsequently dissolve. By connecting the subconscious with reality, the film both re-animates the torment of her father’s repressed memories and responds to French society’s symptomatic denial of its colonial past.

Thunderbird, 2018, recalls the ancient legend of a temple commissioned by the Sumerian ruler Gudea and dedicated to the god Ningirsu and his avatar the Thunderbird, a magical hybrid creature with the body of a bird and the head of a lion. In response to the destruction and pillage of the last major archaeological sites in the Middle East, Rebet animates this divine myth which was inscribed on some ancient terracotta pillars that were discovered in the region.

Presented in the first-floor gallery, and making its UK premiere at Parasol unit, is Christine Rebet’s animated film Breathe In, Breathe Out, 2019, produced by the Fondation Cartier pour l’art contemporain as part of their Nomadic Nights exhibition, Trees. Inspired by Rebet’s recent travels to the north of Thailand, the film follows the spiritual journey of a monk as he descends a mountain. His path is transformed by the metamorphoses of animals and plants mixed with architectural and mythical forms evoking the devastation of our natural environment in this era of globalisation.

“I am interested in preserving hand-drawn animation for myself because it is my act, my gesture. My gesture is to draw. The magic of the hand. ” 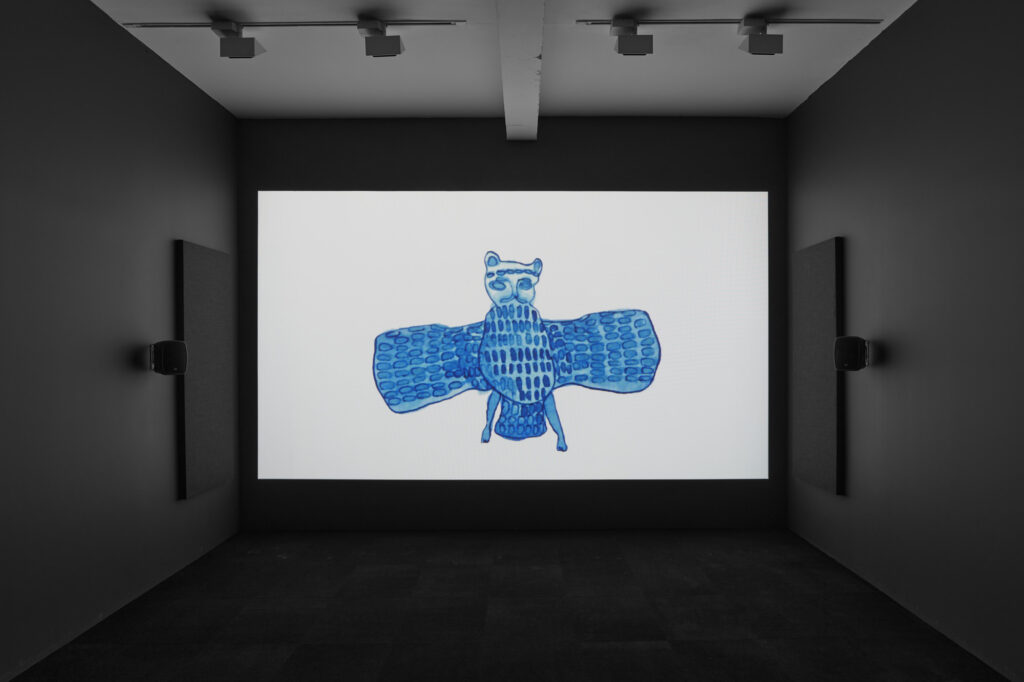 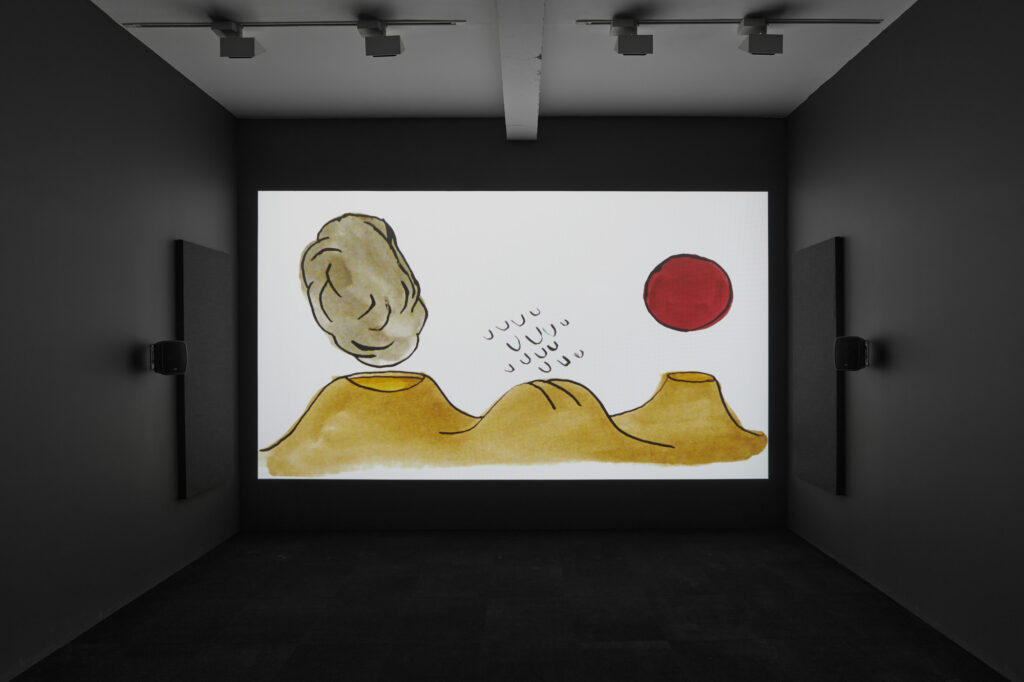 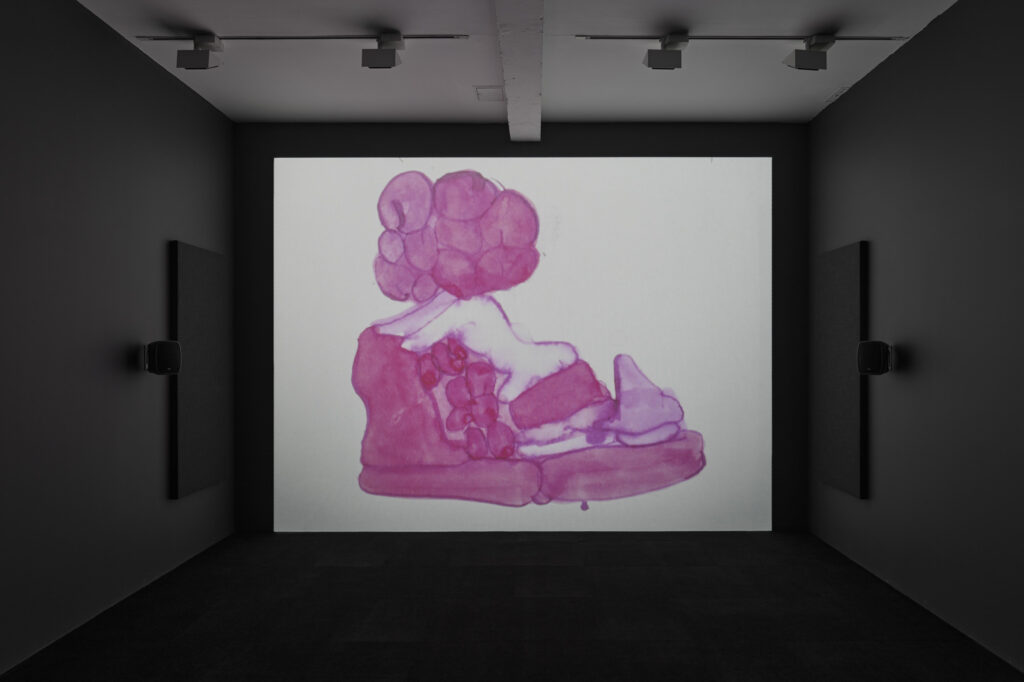 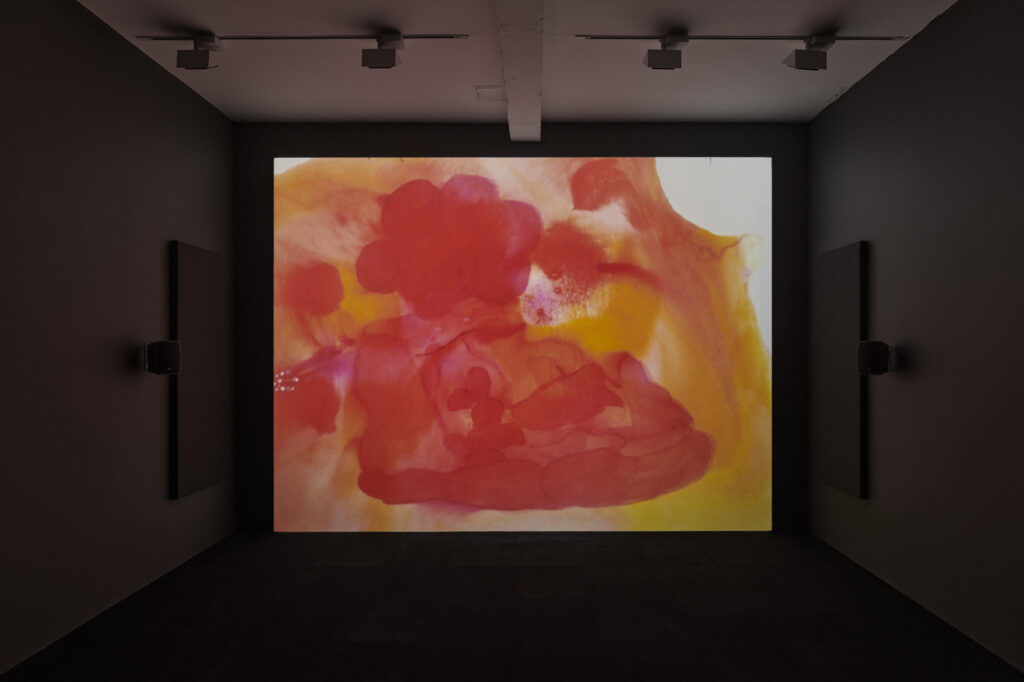 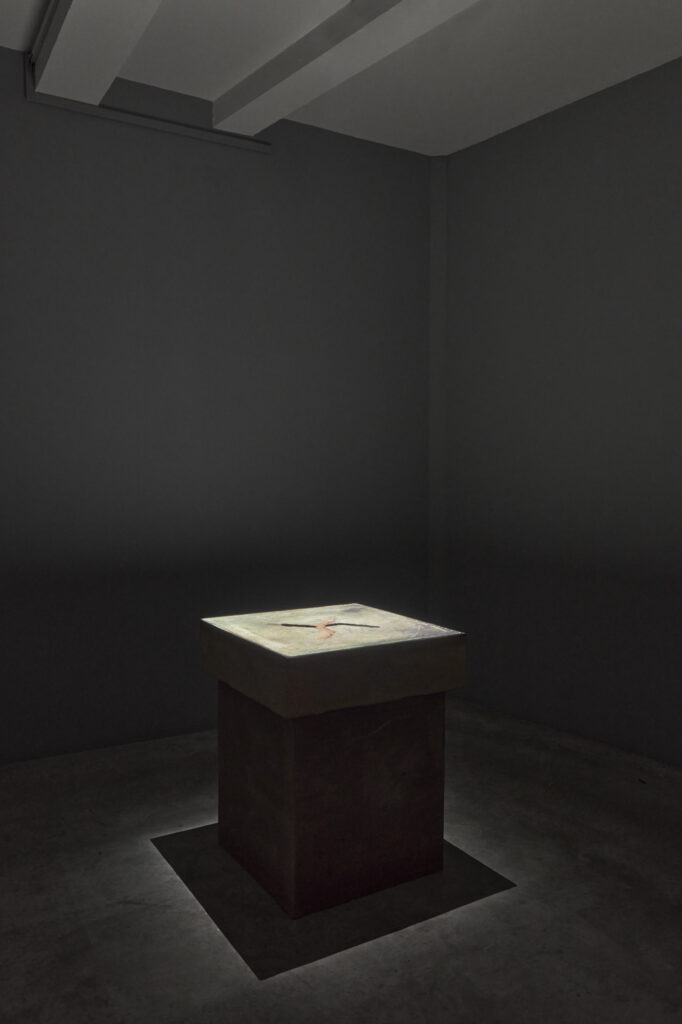 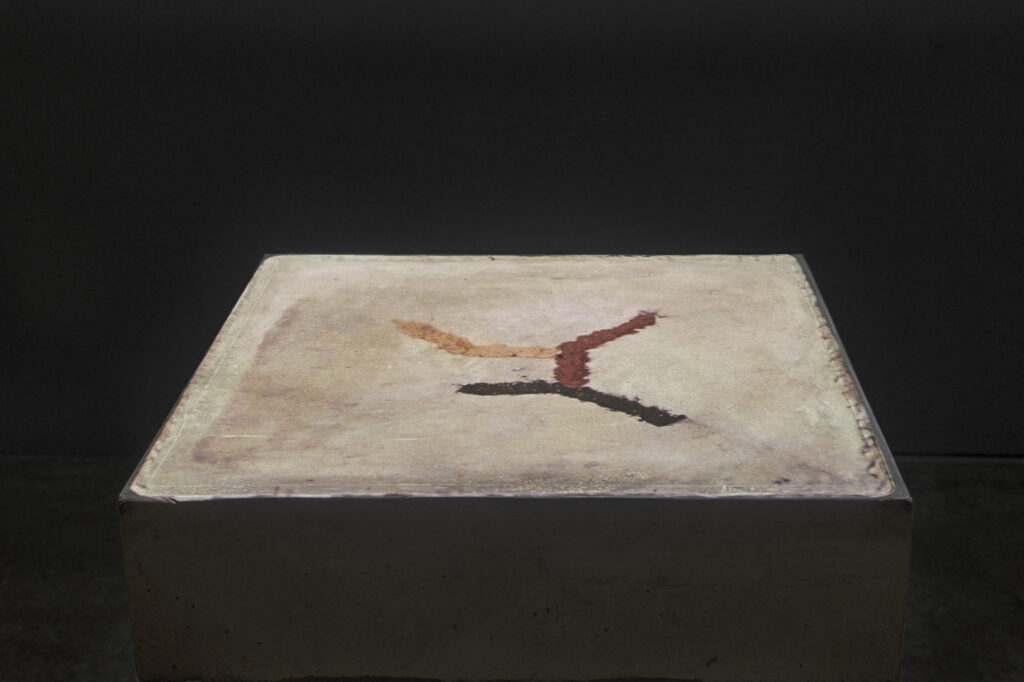 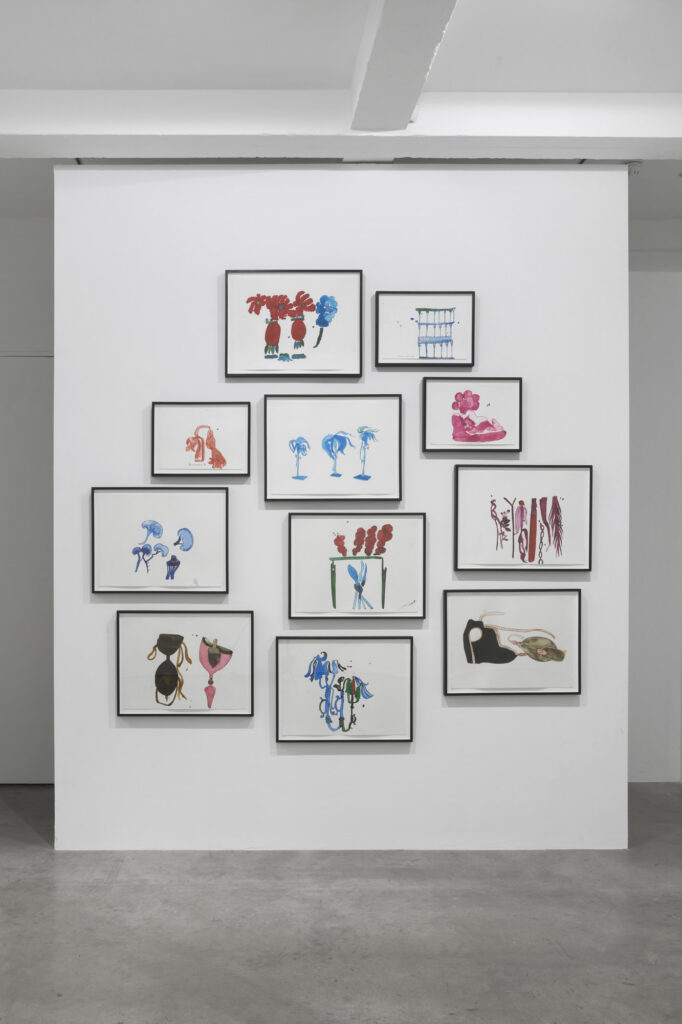 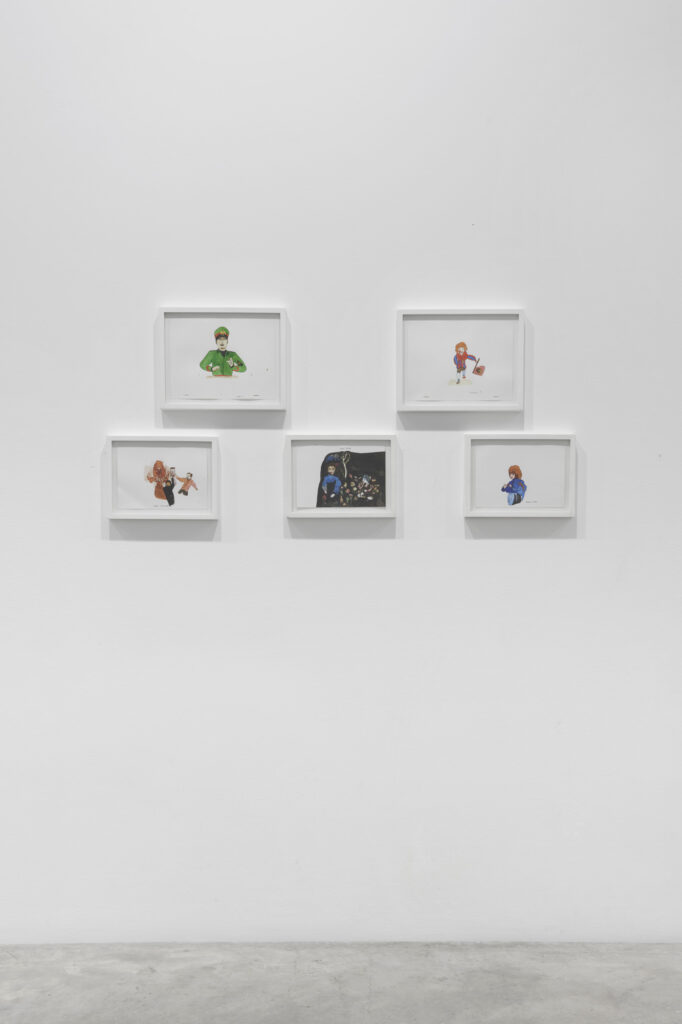 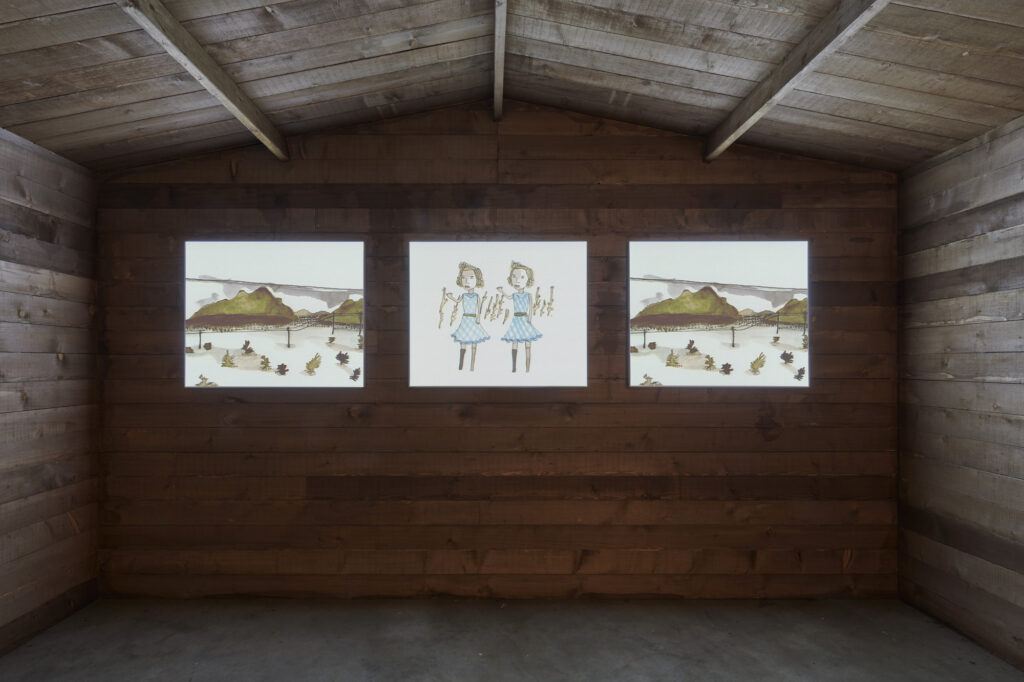 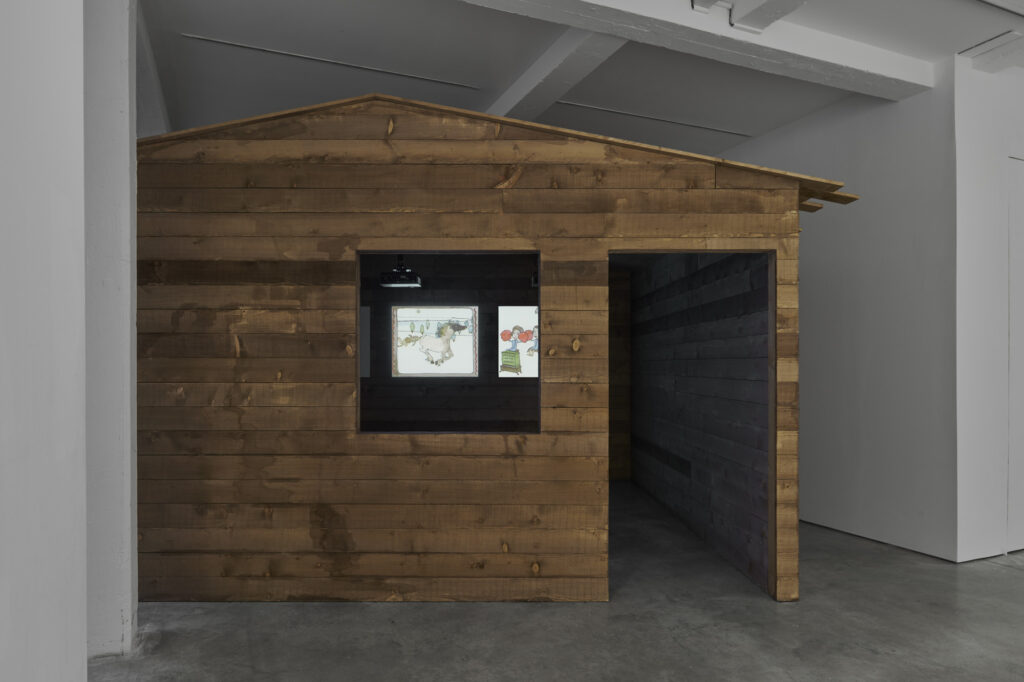 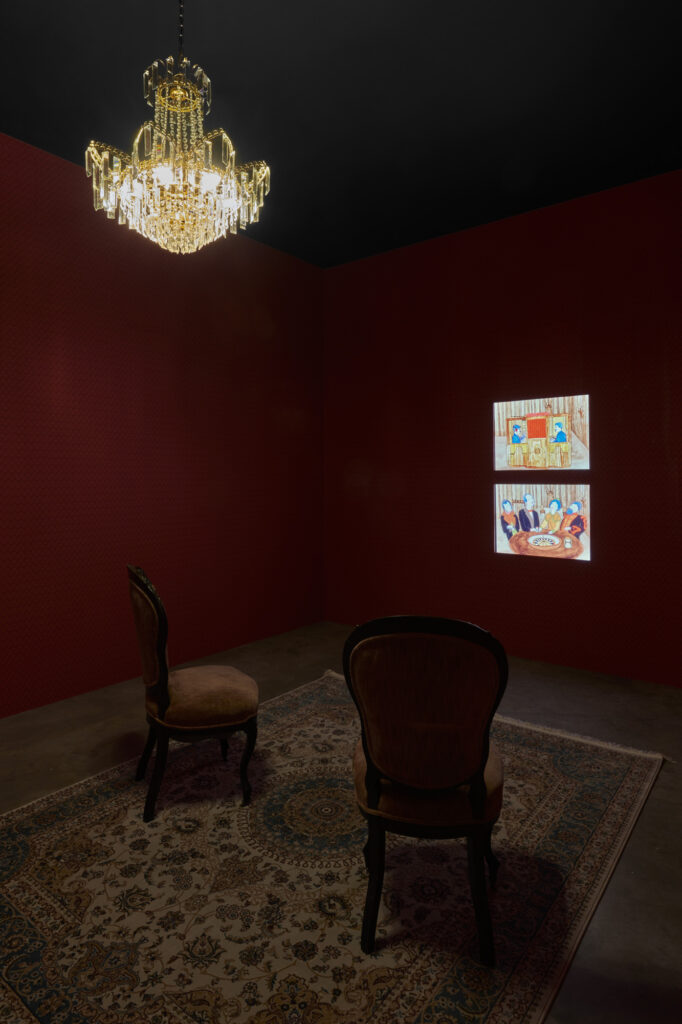 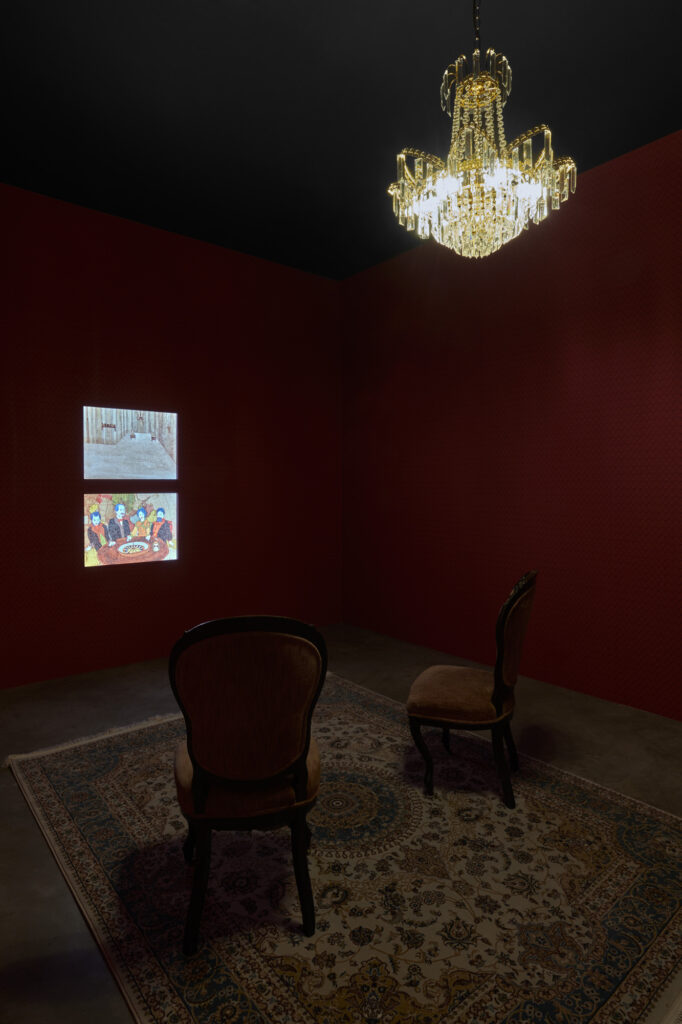 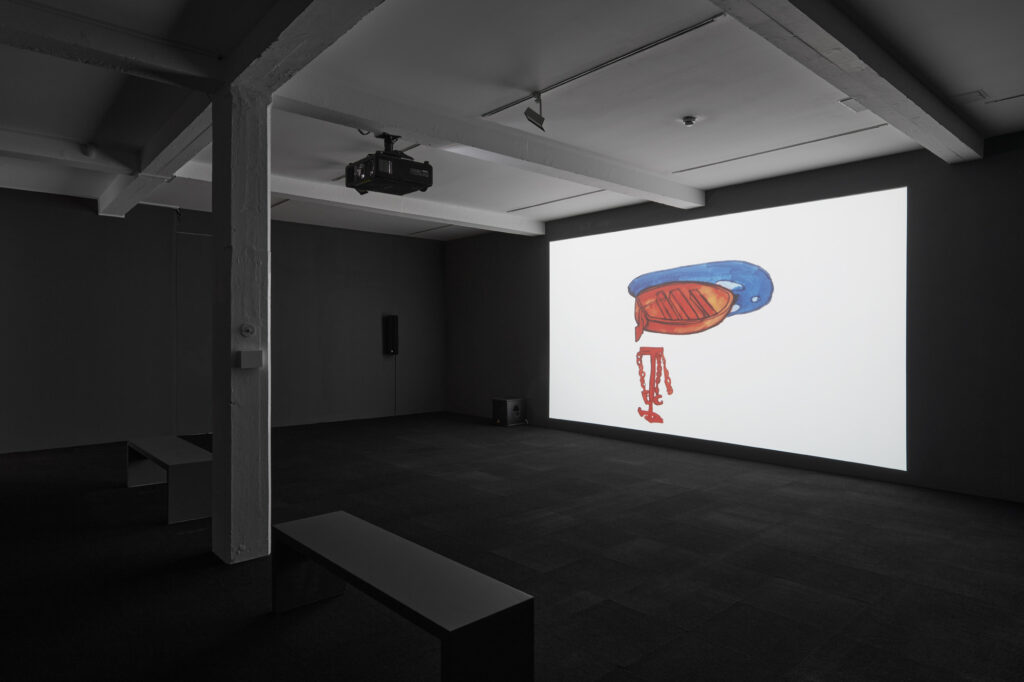 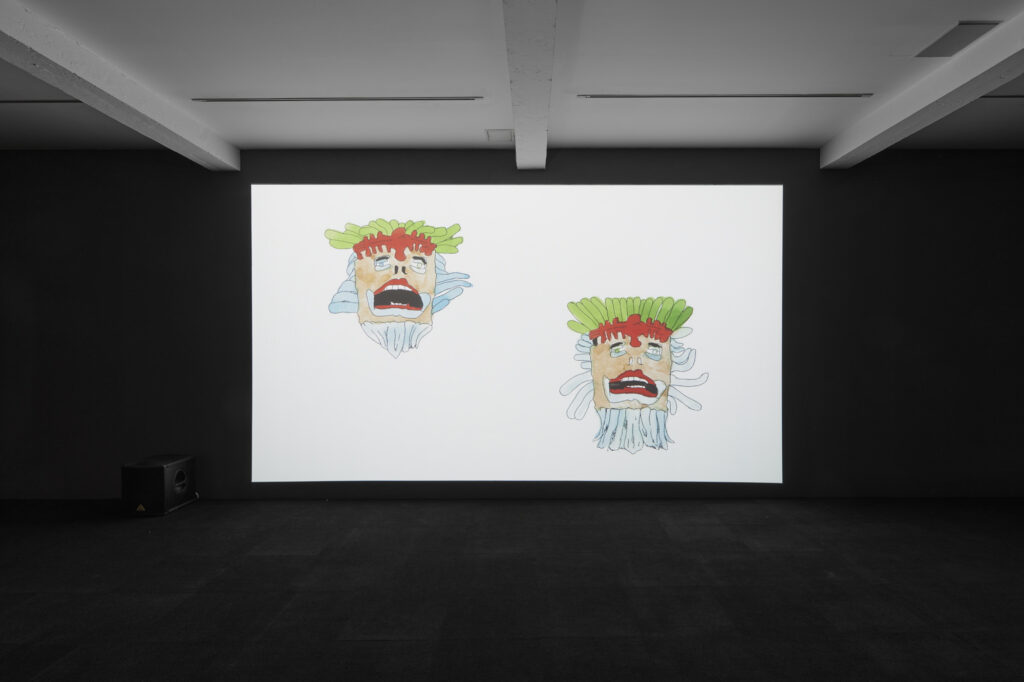 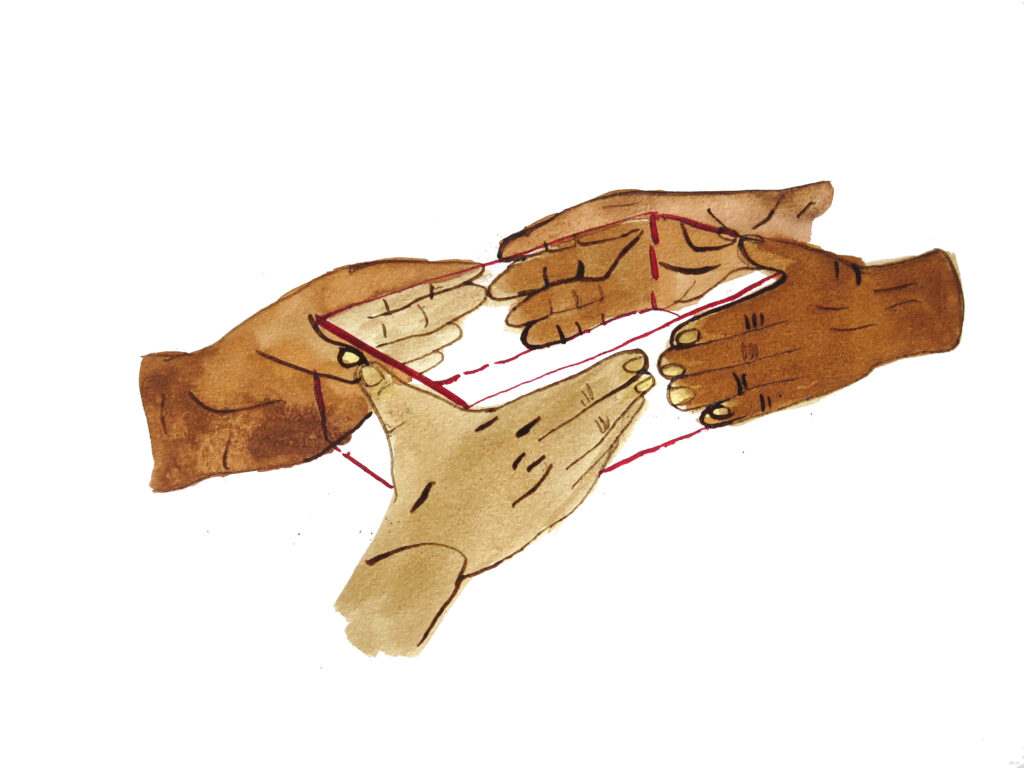 A Ballad of Transformation