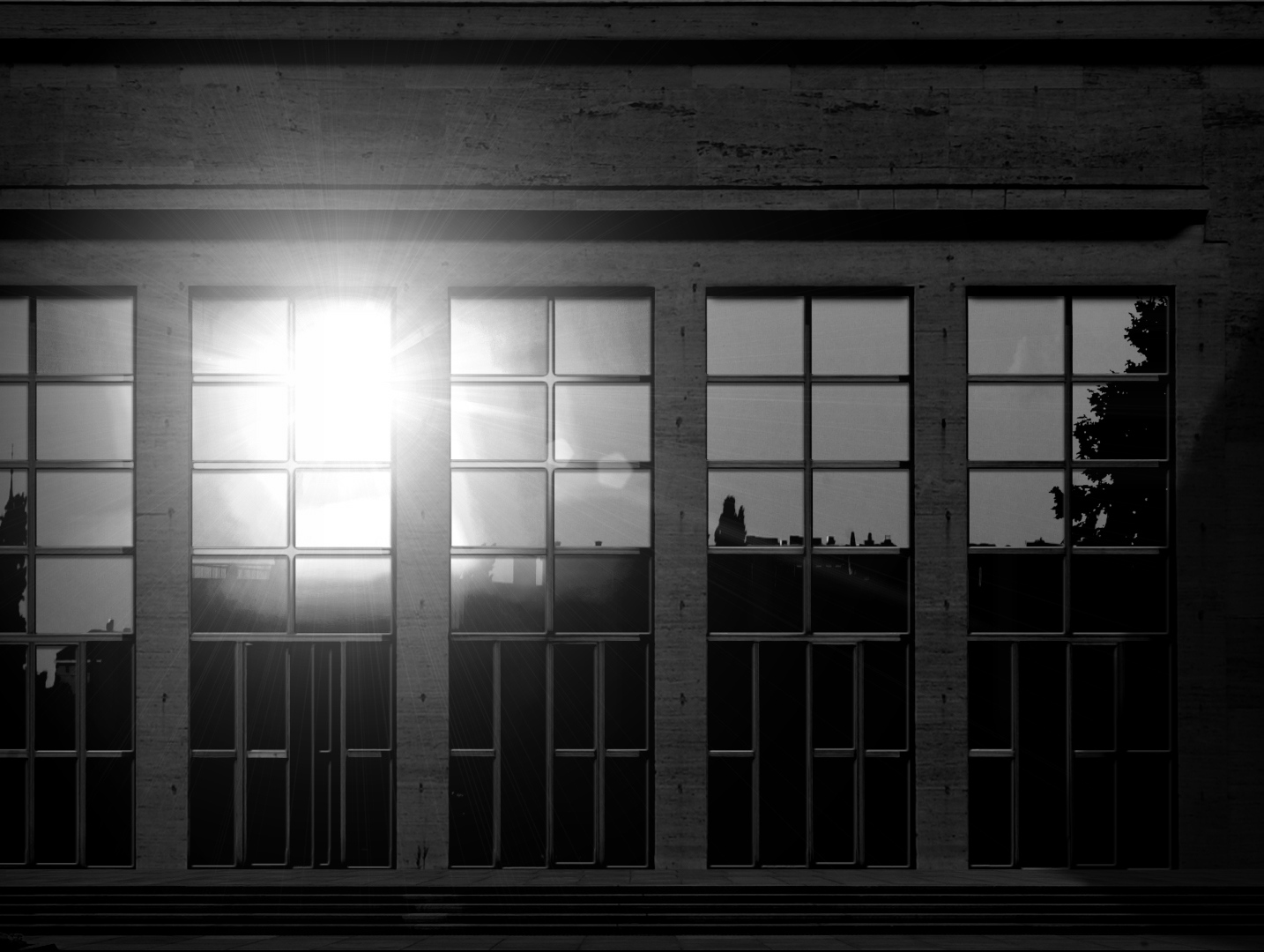 The Thrill of the Unexpected

It is interesting to note that as soon as we encounter any kind of occurrence, a relationship is immediately and precisely established between what has occurred and oneself. This is a reality which sets the stage for a journey in which both parties, whether friends or foes, become travelling companions on a journey that may or may not fill with unforeseen surprises.

Let us think for a moment about what can be considered an occurrence. It could be simply meeting someone, which in turn has the potential to become either a life-changing or totally insignificant experience. It could be the birth of a child, which would entirely change one’s life and existence. It could be a journey to a known or unknown destination, which may offer us the potential to discover somebody or something special. Or it could simply be a walk in the woods, fields, a park, or in the mountains, which lets us perceive some hitherto unnoticed reality or object.

The global effects of Covid-19, which we have all experienced these past few months certainly constitute an unusual occurrence, and now that its existence is established, we and the virus must journey together into the unknown. Some people think that once the virus has been beaten, life will be different; while others disagree and are positively and avidly looking forward to resuming life as it was before, to the life they had previously known as normal. Let’s keep that question open for now as we ponder more on whether the whole experience will lead us to discover something new or will in some way enhance our life.

It was with just such philosophical thoughts that I recently took a walk in the woods. Nature, still somewhat in its state of winter dormancy, seemed on the verge of reasserting its life and energy.

However, for much of my saunter, I walked on dry leaves and at each step could hear the crunch of them beneath my walking boots. Interestingly, the simple act of walking connected me to the past, to seasons long-since elapsed and to the leaves which would never regain their past vitality. 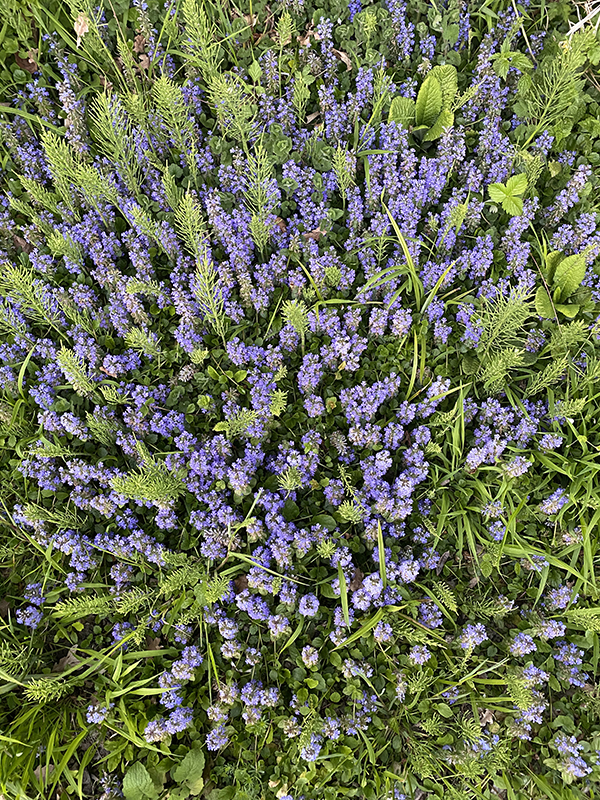 This stroll was never meant to have any specific destination. Although I had been busy with many thoughts filling my head, I knew it was time I got some fresh air. Perhaps the real reason for my walking was that I needed to clear my mind. I realised as I walked that I was gradually losing my sense of orientation, but I did not mind because this was a relatively well-known area and losing my sense of orientation is how I usually relax in stressful situations. After a few minutes, the dense trees among which I was wandering gradually became more open. I could faintly detect signs of renewed life: patches of blue in the sky above and some green grass here and there beneath my walking boots. And no wonder. After all, we had already passed the spring equinox – a time to celebrate renewal, rebirth and fertility. Only a little further on, I came to an area of deep blue tufts of spring flowers growing under the trees. My spirit was intensely lifted by the experience and a leisurely walk to relax my mind ended with a beautiful encounter. I realised life and renewal were there not only because the solar calendar predicted it, but because the reality of it was there to confirm it.

Issue 02 of O Sole Mio presents works by the artists David Claerbout and Thanh Thi Tran, as well as a written reflection by Princess Alia Al-Senussi.

The works by David Claerbout and Thanh Thi Tran share a peculiarity in that their images deal with the sun in motion, which introduces to them an inherent element of time. In David Claerbout’s Reflecting Sunset, 2003, the sun moves through time from one windowpane to the next. Whereas, Thanh Thi Tran’s paintings, Post Stasis, 2020, seem to function as a stage on which clouds seemingly appear and disappear, thereby creating a noticeable tension through lapses in time. The works of both artists also contain and highlight a certain element of unpredictability, something that inevitably opens up to unexpected occurrences and new opportunities.

Primarily working with photography and moving image, David Claerbout, like many artists of his generation, is fascinated by found images and creates his works by extensively appropriating and reconfiguring them. He has collaborated with Parasol unit on several other projects.

Thanh Thi Tran is an artist who works primarily with paint. At first glance her work appears to be a visceral expression with the potential to become a cathartic experience, which can be seen in her series entitled Repetition in Truth. For this O Sole Mio exhibition, Tran has painted the image of a sun almost completely covered with delicately applied dabs of white paint, as if it were partly shielded behind a drift of moving cumulus clouds.

For the Reflections section we are inviting those from the artistic community to contribute a thought, memory or observation in response to ‘O Sole Mio’.

Born in the USA, raised between Cairo, the US and Europe and now based in London, Princess Alia Al-Senussi, PhD, is a collector, art patron and cultural strategist with a particular interest in the arts and artists of the Middle East. She recently received her doctorate in Politics from the School of Oriental and African Studies in London, is currently Art Basel’s UK, Middle East and North Africa representative, and works as the adviser for arts and culture at the Milken Institute and a senior adviser for the Saudi Ministry of Culture. 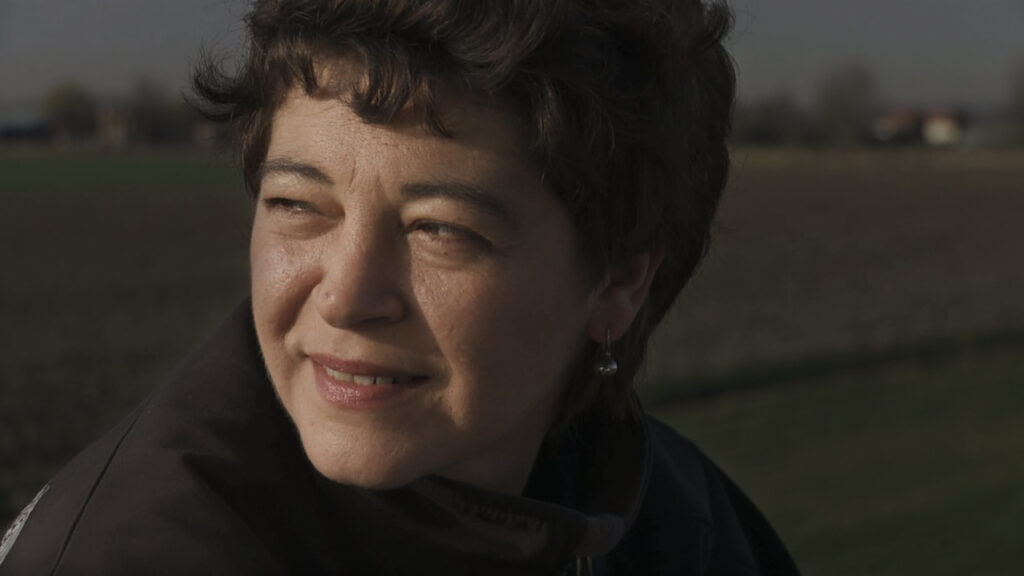 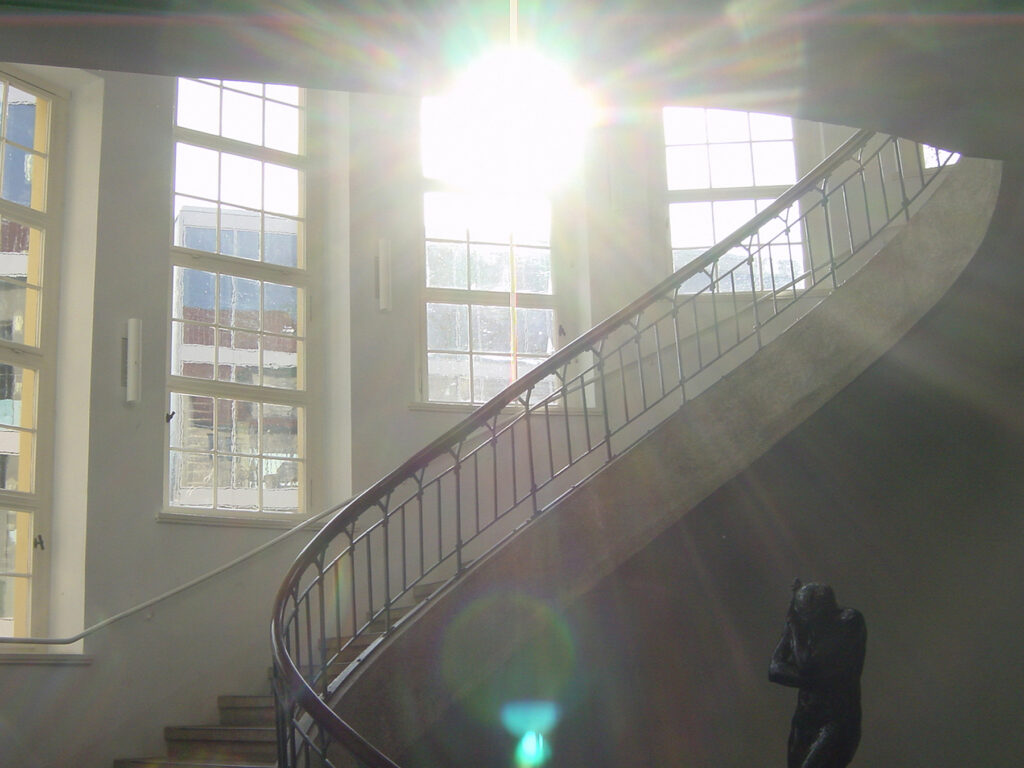 This Sun is Always Shining

Once upon a time, on the wall of Edvard Munch’s studio, there was a cut-out from a magazine advertisement about the health benefits of infrared. It read Diese sonne strahlt immer, which became the title of my 2012 exhibition at the Vienna Secession.

Throughout early modernity, industrial modernity and to this day, there seems to have been a promise that if we work hard enough and push our belief in scientism to its limits, we might arrive at a stage where all the dark corners of human existence are permanently lit up, reaching, as I imagine, the final stage in the pursuit of happiness.

So much thinking and desire is based upon light, enlightenment, reason and the dangers of the sleep of reason, that it is easy to detect a contempt for the opposites: sleep, darkness and resting. However, in my dictionary I have slowly come to exchange enlightenment for ‘too much light’. From a neurophilosophical point of view there are many reasons to believe that today’s criteria of light and happiness are the hallmark of the psychologically sick.

And here is where we are. Screens light up 24 hours a day. They are our main gateway to an outside world during confinement (the so-called lockdown). Permanent light.

As a filmmaker I have spent much of my life working with the light-based devices we call ‘video projectors’ or ‘video beamers’  that some 20 years ago had a feeble output of 250 ANSI lumens and today have up to 6,000+ ANSI lumens.

What has always drawn my attention is the fact that what in film looks like a bright sunlit world is in fact conveyed by a relatively weak lightbulb or laser that bears no comparison to the sun’s approximate 126,600 lumens per square metre.

In my film installations, such as Reflecting Sunset, 2003, and Sunrise, 2009, but also in the Rodin in Weimar photograph, 2003, [below] the brightness of the sun has been thematised as something too bright for anyone to behold. Any beholder intuitively gets this feeling. Despite the weakness of the physical light source, our innate memory reminds us of the unease of looking directly into the sun. The digital film surmounts its own technical conditions and thematises its own incapacity by prompting a sheer human reflex.

And so continues my search for small, insignificant evidence of a world existing out there while having been in digital confinement for 20 years.

Parasol unit has previously presented two solo exhibitions of David Claerbout’s work. In 2019, The Pure Necessity showed in Zuoz, Switzerland; and in 2012, the time that remains showed in London.

David Claerbout, born 1961, lives and works in Antwerp and Berlin. 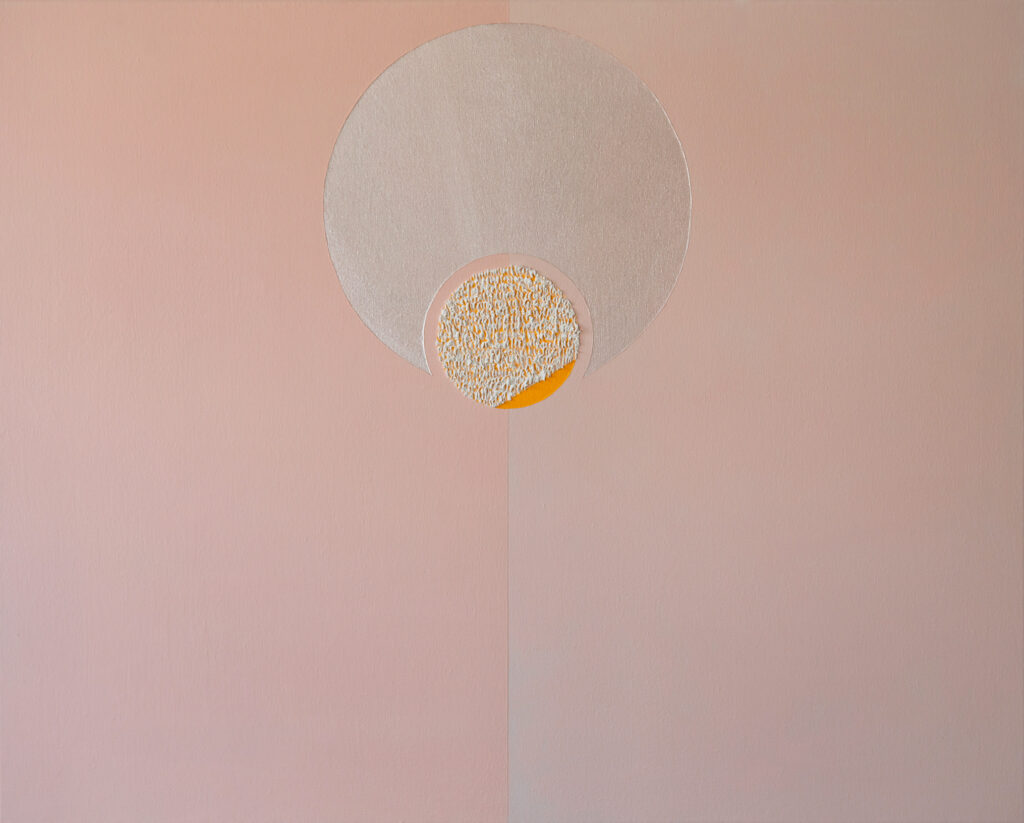 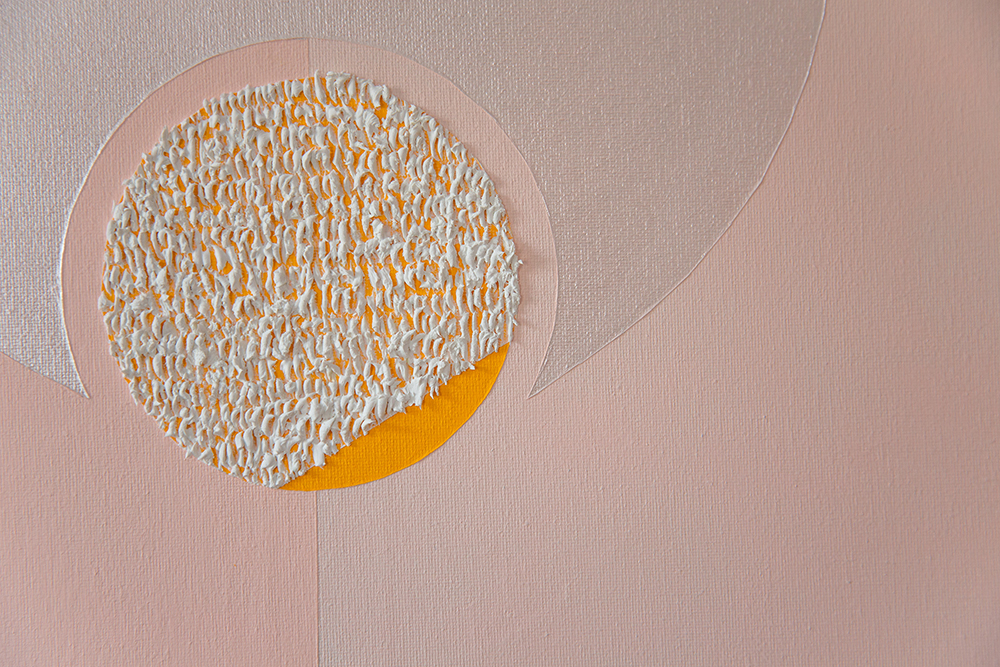 The song ‘O Sole Mio’ is presented in the context of a world amid the Covid-19 pandemic. A world that has changed dramatically over the past 100 days. It is the first experience of my generation that comes even mildly close to being potentially world- and life-changing for all who survive. However, this is no ‘ordinary’ war being fought.

This may seem an oppressive time, with us needing to keep physically distant from those we care about, but it also creates opportunities for us to connect to the surrounding world differently. It reminds me of the cyclical nature of the way we exist – pendular peaks and troughs of life repeating like Newton’s cradle – with minimal loss of energy.

I love the multifaceted utilitarian image of the circle representing repetition, cycles, new days and new life – from the cellular level of a zygote to areola, an image of sustenance. It has been an inspiration for me in how I view life on a macro, micro, literal and abstract level. I am also particularly fond of iridescence – as one must physically move and work for the catching of light.

‘O Sole Mio’, although written over 120 years ago is the musical iteration of how I see us coming out of this period. An ode to the resilience of humanity, but also a comment on the cyclical nature of life – giving way to a new sunrise. 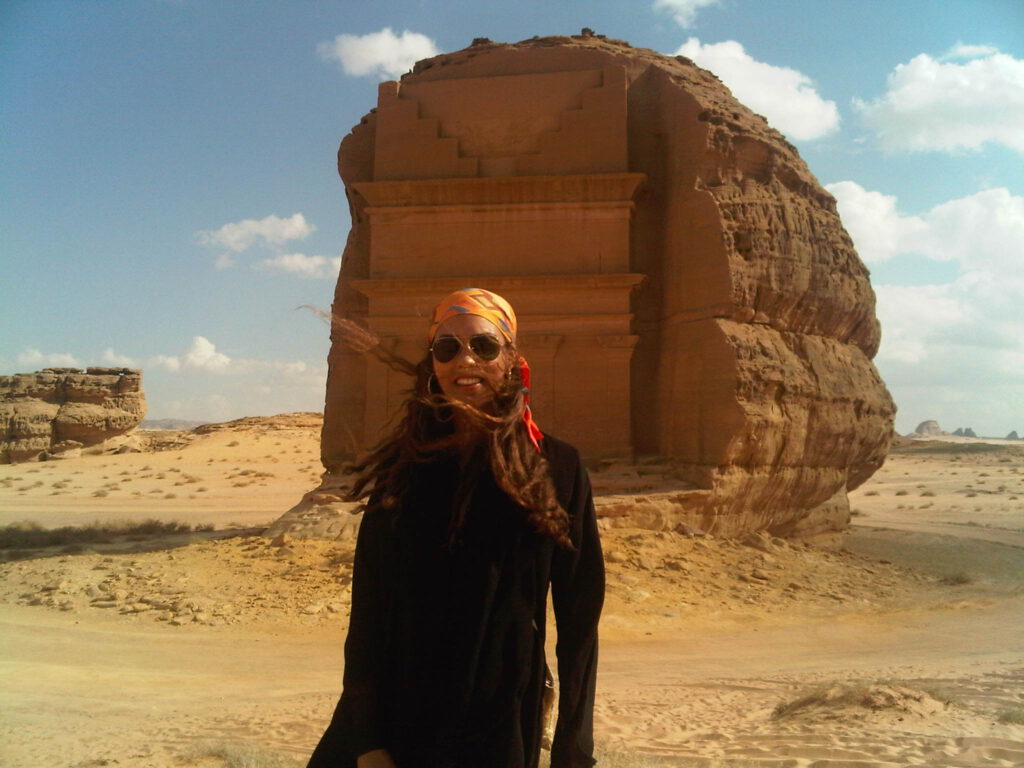 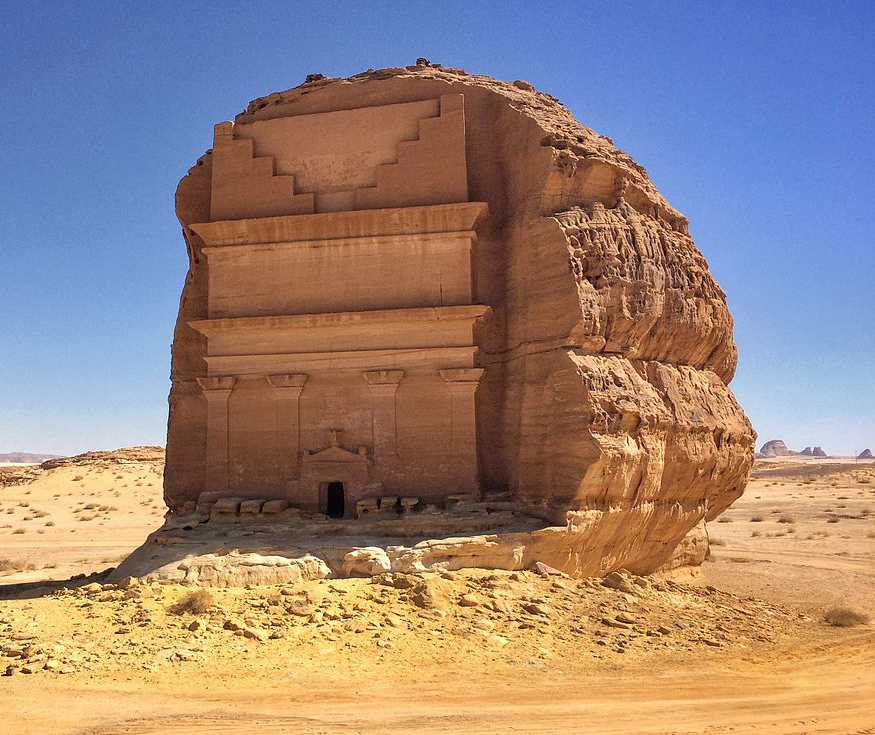 ‘O Sole Mio’, the feeling of the sun in the amazingly expansive Arabian desert, and yet also O Solo Mio, the solitude of such moments, of the monumental and aptly named tomb Qasr al-Farid (Lonely Castle),1 and the solitude of now. The first time I was at Al-Ula in Saudi Arabia, was more than a decade ago, since when I have returned several times with artists and friends to experience the power of culture, of something lying dormant for aeons now reborn in testament to an ancient people, and to inspire artists of today. To think that last trip was so momentous – taken just a couple of weeks before the world completely transformed. We explored the ancient sites of Madaen Saleh, experienced the mirth of American singer Lionel Richie, and felt the power of new technology, of the drones of art collective Studio

Drift playing a delicate frame to al-Farid. Indeed, the solitary sun still unites us all, and I have no doubt that we will emerge to shine on all of those around us. 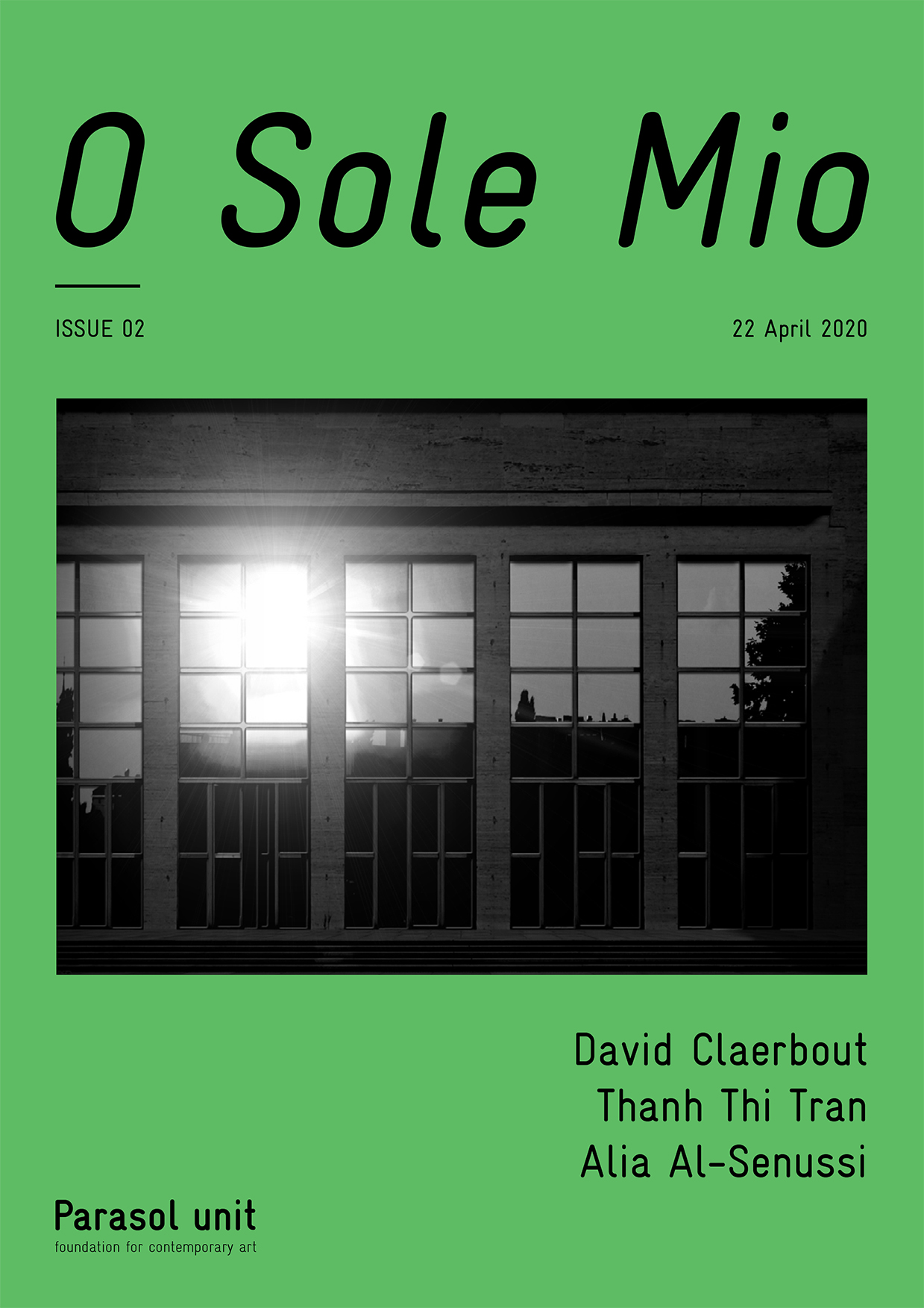