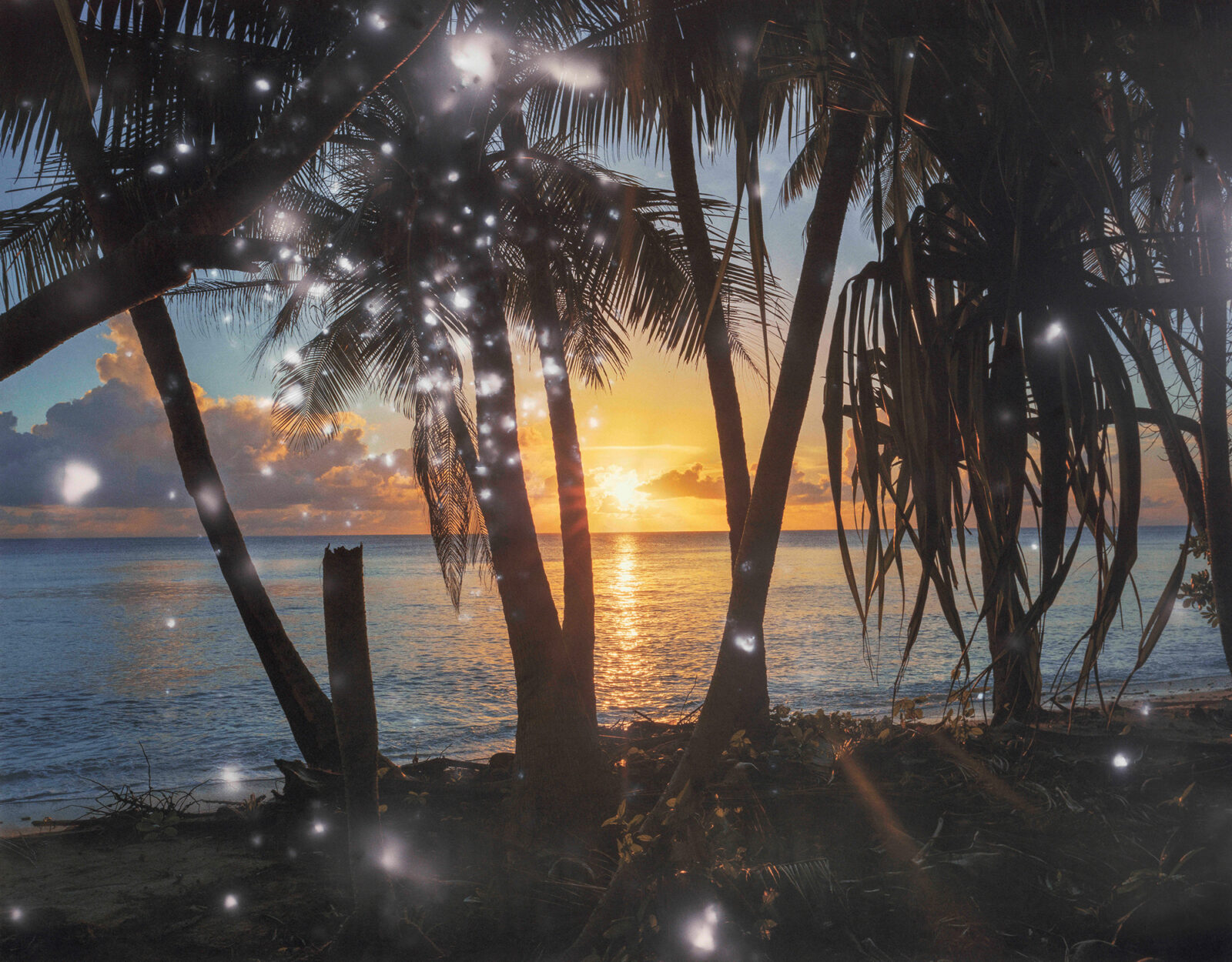 Seeing so many fields of colza (oilseed rape) so early in the season this year comes as a most welcome occurrence – an almost surreal gift. For in this mountainous part of the world, colza flowers usually make their irresistible presence visible to us somewhat later, in the month of May. In every one of the many seasons I have been lucky enough and grateful to witness them, the sight of the dazzlingly yellow fields has, more than anything else, meant to me a pure celebration of light, hope and life. A dichotomy exists, of course, between the seemingly sudden appearance of these exhilaratingly beautiful yellow fields and the reason for their cultivation, which is the production of rapeseed oil through a mechanical process.

The luminous experience of that startling yellow struck me once more as I was looking at Christine Rebet’s marvellous drawings, Archaeology of the House of Dreams, and Julian Charrière’s impressive photograph, Sycamore from his First Light series, which the artists have contributed to our digital O Sole Mio exhibition. The kinship was further strengthened when I made another connection: the fields of colza, Rebet’s drawings and Charrière’s photograph all in some way exemplify a tension between nature and technology, a tension that is not only physical, but also reflects a psychological dogma that has pervaded our existence since the Industrial Revolution.

Archaeology of the House of Dreams tells an intriguing story with multiple images and various brief texts spontaneously brought together on paper in April 2020 and clearly recalling a childhood vision. When Rebet was a young child, her school class was asked to draw the ‘House of our Dreams’. Rebet presented a house that was operated by the infinite rays of an eternal sun. From the vantage point of today, Rebet’s delicate drawings suggest a metamorphosis of nature, architecture and machine working in unison, which has become a hallmark in her work.

Julian Charrière’s Sycamore photograph from his First Light series was taken in 2016 during one of his exploratory trips to Bikini Atoll in the Marshall Islands. Against a backdrop of idyllic tropical scenery with a blinding sun on the horizon, Charrière lets us observe the remnants of atomic bombs and the dramatic effect they have on vegetation and landscape. In all its seemingly pristine beauty, the bittersweet relationship between nature and technology is somehow persistent, which reminds me of Leo Marx’s book The Machine in the Garden from 1964. Nonetheless, I am overwhelmed by the energy and optimism so clearly alive in every human heart and ensuring that the natural world will prevail.

For the Reflection section of O Sole Mio, art professionals are offered an opportunity to express their thoughts. In this issue, Francesca Giubilei and Luca Berta of the Venice Art Factory in Italy have formulated some touching and positive thoughts, together with an energising image of some gondoliers at play, which speaks of the vitality of life in the face of imminent isolation, perhaps even the seemingly impossible. Bringing into dialogue the two special Italian cities, Venice and Naples, Francesca Giubilei and Luca Berta celebrate the universality of art and cultures that see no borders.

It is fitting here to thank Christine Rebet, Julian Charrière, Francesca Giubilei and Luca Berta for their remarkable vision and contributions that have made possible this fabulous issue of O Sole Mio. So, in the face of the most drastic challenges, let us remind ourselves that light and its invincible strength remains always with us. 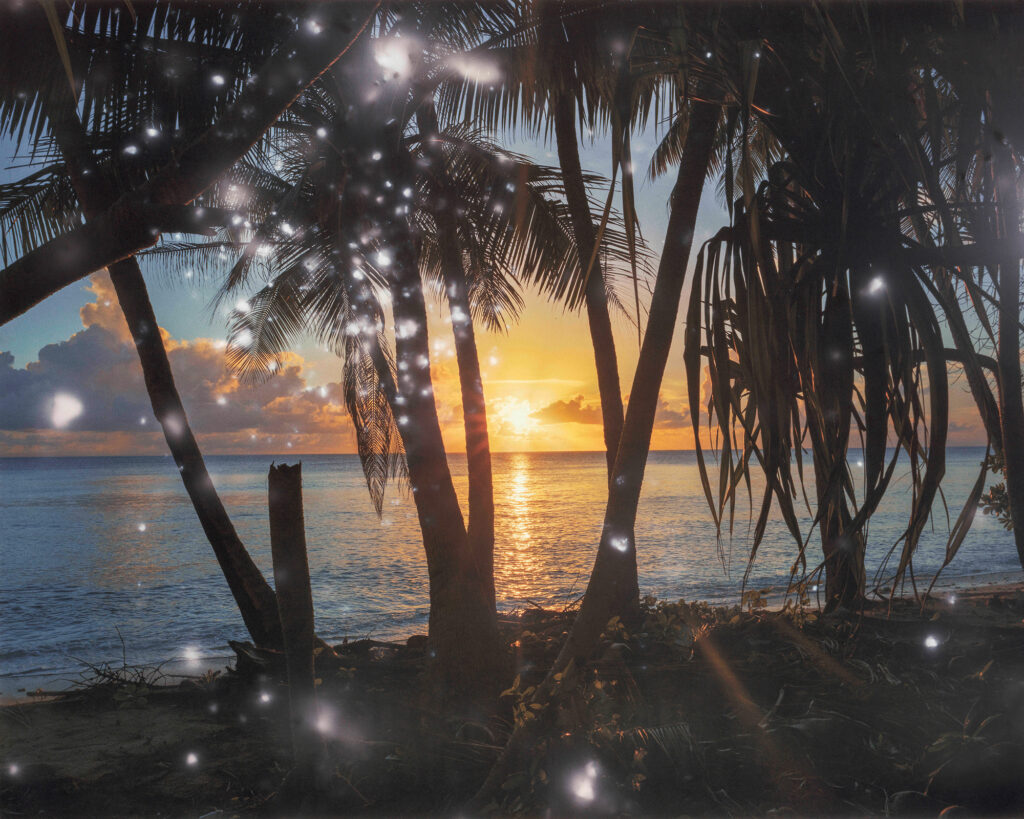 Sycamore, a photograph from Julian Charrière’s First Light series produced while he was on Bikini Atoll, wonderfully resonates with the song ‘O Sole Mio’ as well as to the Covid-19 situation. As he says,

Somewhere on the edge of the horizon, between dawn and dusk, the light radiates. The traces on the photograph shine back at us like stars in the sky – a superimposition of day and night in a cycle with no beginning or end, hiding another dimension. It is scary, but it is also beautiful. It is part of a cycle incomprehensible in time, but graspable only in the moment. Because paradise can be found in the most unexpected places, the First Light series is an invitation to see beyond binaries and to indulge in the totality of what lies in front of us.

Fusing environmental science with cultural history, conceptual artist Julian Charrière creates works in a variety of media, including sculpture, photography and performance. He travels to remote regions to explore and research ecological and environmental issues in locations such as volcanoes, salt flats, and radioactive sites. Much of his work is concerned with the concept of time and examining tensions between humanity and the natural order.

Julian Charrière, born 1987 in Switzerland, currently lives and works in Berlin, Germany. In 2016, Parasol unit showed For They That Sow the Wind, Julian Charrière’s first solo exhibition in the United Kingdom. 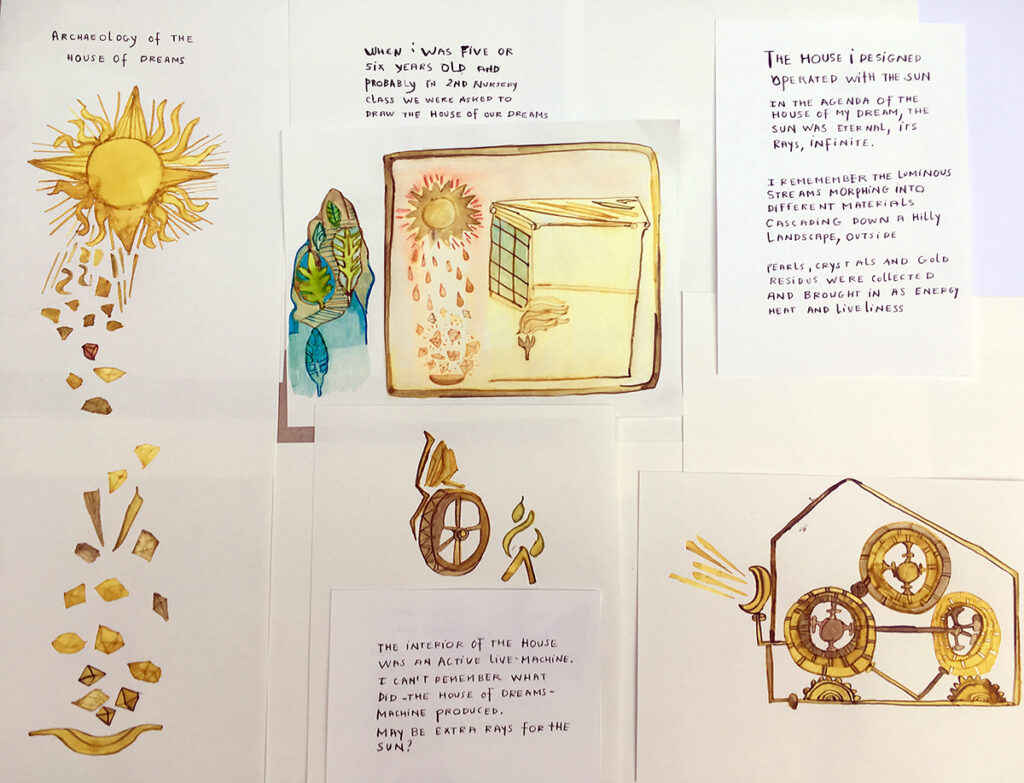 Christine Rebet, 'Archaeology of the House of Dreams', 2020. Courtesy the artist. 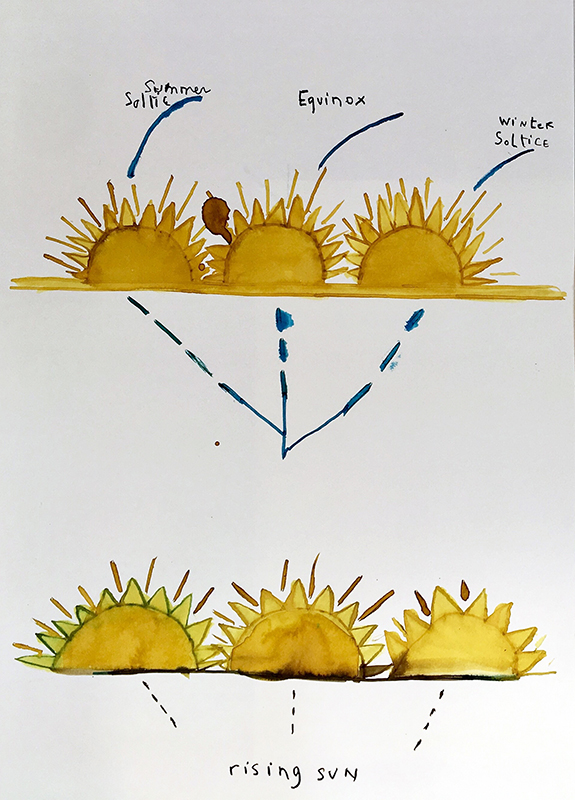 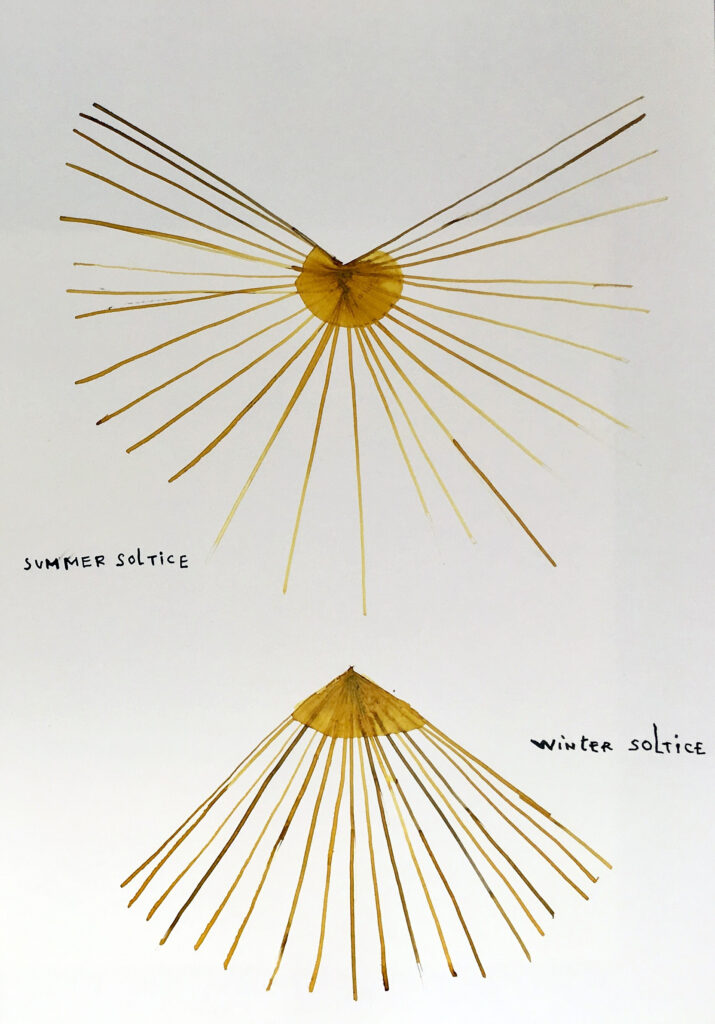 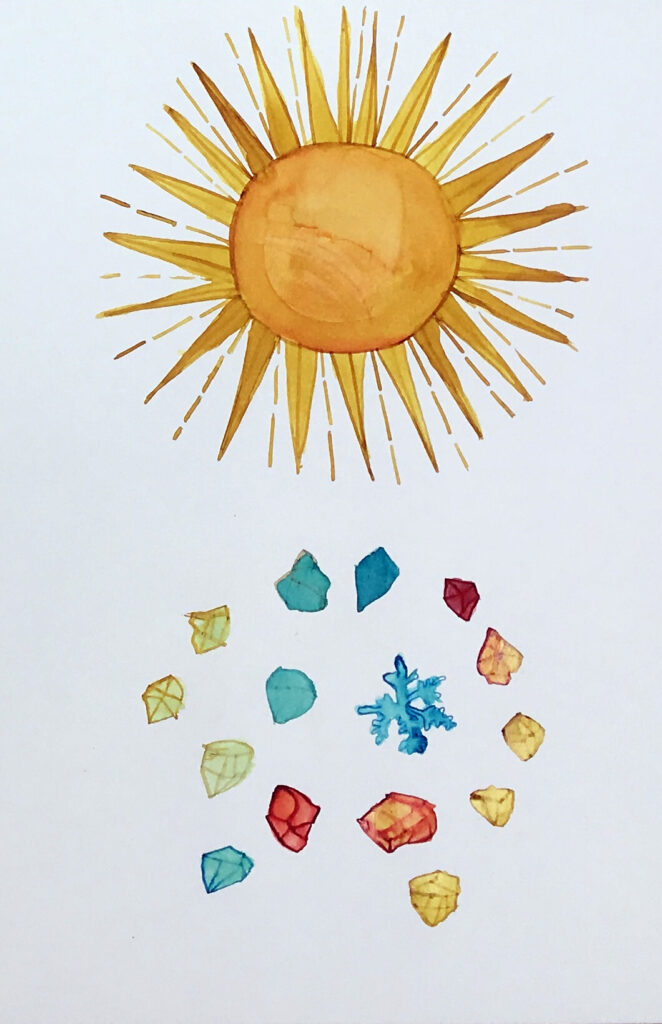 Archaeology of the House of Dreams

When I was 5 or 6 years old, and probably in the second nursery class, we were asked to draw the ‘House of our Dreams’. The architecture I presented in class was operated by the sun, whose presence was eternal, its rays infinite.

I remember its luminous streams outside, morphing into different materials, cascading down a hilly landscape. Pearls, crystals, and gold residues were collected and brought inside to nurture the house with energy, heat, and liveliness. The interior of the house was an active live-machine. I can’t remember what this machine produced – maybe extra rays for the sun?

Sometimes when I draw under sunlight, the raw lines of the drawing reappear in my mind. I learned to welcome this magical visit as an early blueprint of creativity.

Drawing is central to Christine Rebet’s practice, line creations which she often develops into hand-drawn animated films, sculpture or performance. Much of her work examines the idea of metamorphosis, identity and trauma, both personal and collective, and most recently the destruction of our shared environment and cultural heritage.

Influenced by her background in theatre design from Central Saint Martin’s in London, Rebet often brings a theatrical element into her works, presenting many of her films within custom-built spaces along with props.

Christine Rebet, born 1971 in France, is now based in New York. In 2007, Parasol unit included her work in its Momentary Momentum group exhibition, and in 2020 her solo show Time Levitation was the last exhibition to be shown in its London gallery. 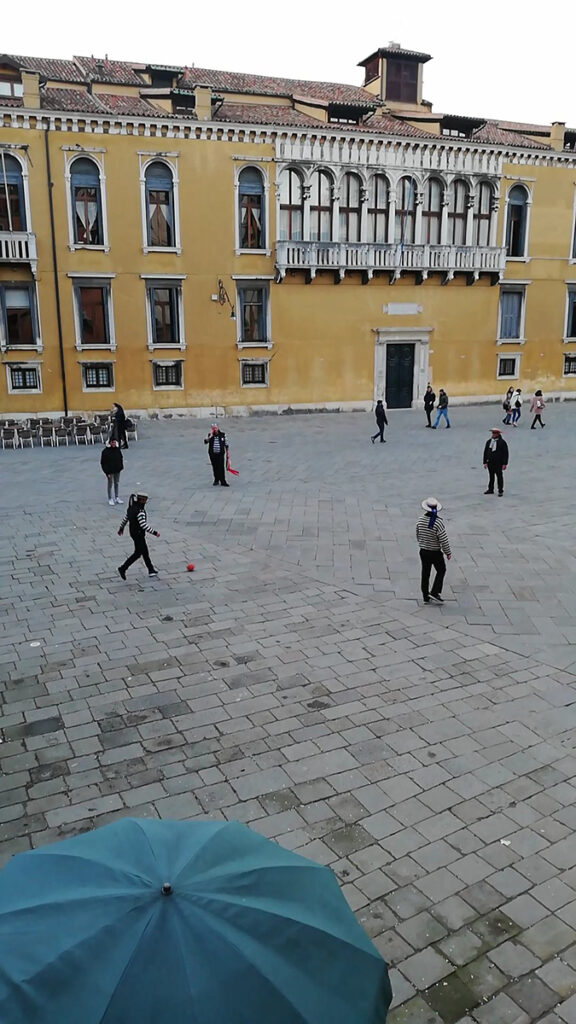 The Sun also Rises on Gondolas

In 1986, and again in 2010, some politicians in charge of the Municipality of Venice tried to prohibit gondoliers from singing ‘O Sole Mio’. The tradition of Venice had to be preserved from Neapolitan songs, as well as from the invasion of backpackers and hamburgers.

A search for ‘O Sole Mio gondola’ on YouTube returns hundreds of videos. Now that the streets and canals are deserted, and the empty gondolas moored meekly like sleeping horses, watching one of those videos generates quite a bit of nostalgia. The last time we saw gondoliers around, before the lockdown, they were in a circle in the middle of Campo Santo Stefano. In the absence of clients, they played football.

Cultural products tend to break barriers: of place, belonging, genre, language. If successful, they circulate where they were not expected to be. Let us try to leave every viral metaphor in the background. Protecting the integrity of a culture is a serious matter, which requires reflection, commitment and resources.

A different thing is the thought of purity, which proceeds through the oppositional logic inside/ outside, and places guardians in defence of borders. Despite every effort, the metaphor returns: we must stay isolated in our own home, keep the virus out with masks and gloves, wash our hands, disinfect everything to prevent the pathogen from entering.

When we asked our friend Steve (a colossus two metres tall with a baritone voice), who sings on gondolas by profession, if he happens to sing ‘O Sole Mio’, he replied, “I always start with a repertoire of Venetian songs. But if someone asks me for ‘O Sole Mio’, I will sing it willingly. After all, it’s a universal song. And what really matters is being able to connect with other people, so that they remember the experience forever.” Steve is very worried because he does not know how many months will pass before people can go back to gondola rides in Venice and asking him to sing for them.

A certain apocalyptic thought, based on valid objections to globalised capitalism and the exploitation of the environment, seems to take root among the comments of intellectuals, journalists and scientists: nothing will return to how it was before, we will have to keep social distancing, we won’t travel anymore, we will no longer produce, we will no longer consume, we will no longer live as before. The big bubble we lived in will finally burst. (Sometimes a pinch of complacency is felt.)

Of course, it would be foolish not to take the opportunity for a profound rethinking of our ways of life and production. But in certain circumstances the thought of purity and the apocalyptic scenario can be welded into disturbing mixtures. The system of contemporary art, which certainly cannot be considered immune from certain justified criticisms, will have to produce paradoxical antibodies, which defend the permeability to what comes from outside, unexpected. For many tourists, their memory of Venice will be inextricably linked to the voice of the gondolier singing ‘O Sole Mio’ as the boat slides under the arch of a bridge. It is also strange for us not to hear it sung outside the windows overlooking the canal.

In September 1960, Elvis Presley released ‘It’s Now or Never’, which remained at the top of the Billboard Hot 100 chart for five weeks, sold ten million copies and became the best-selling single of his career. ‘It’s Now or Never’ is an English cover version of ‘O Sole Mio’. According to legend, Elvis died of a mix of drug abuse and hamburgers.

In 2006, Pino Daniele, the greatest interpreter of recent Neapolitan pop music, proposed his own version of ‘It’s Now or Never’. 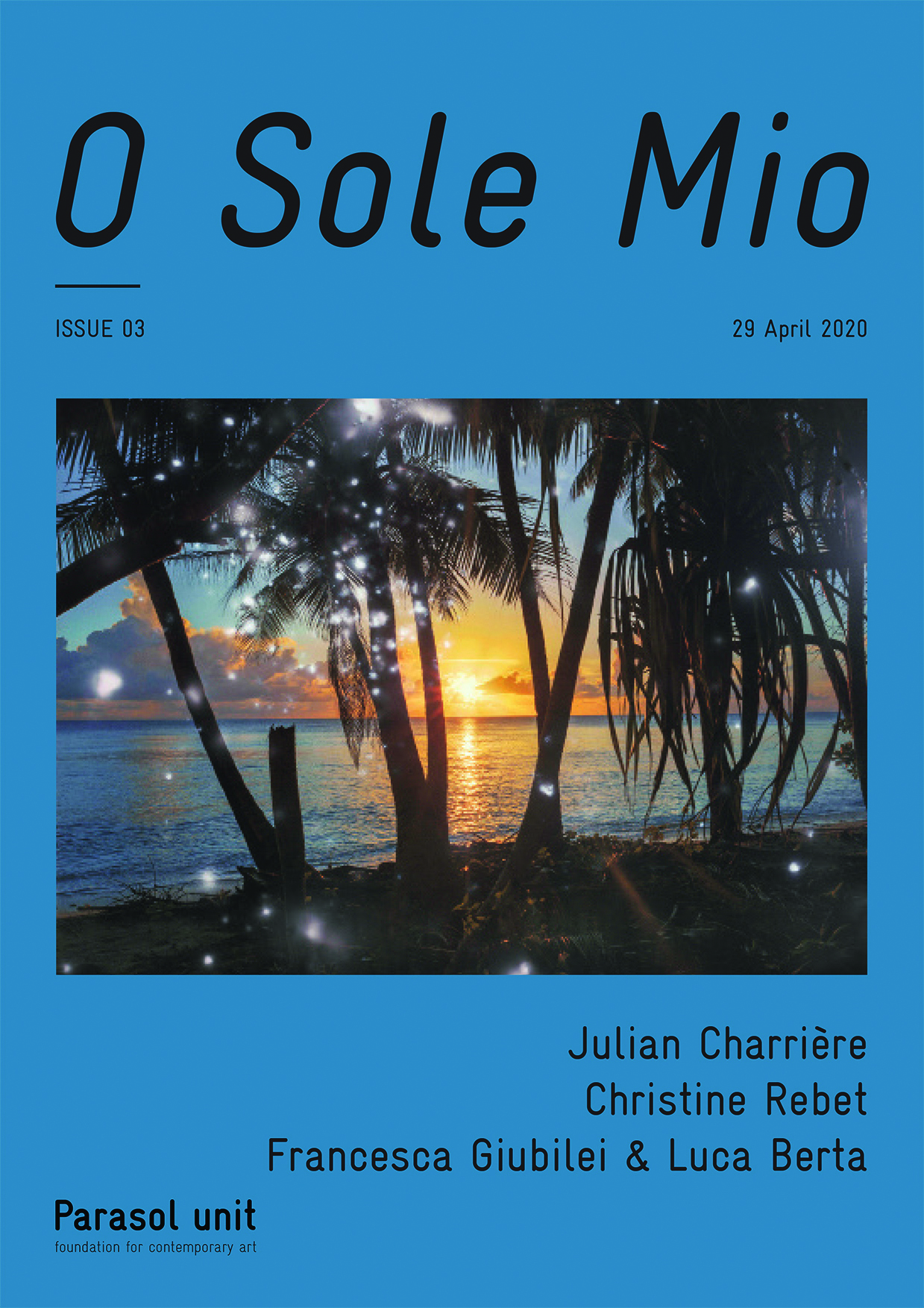