Artists who have shown at Parasol unit

Both Tschabalala Self and Rana Begum had major UK solo exhibitions at Parasol unit in the recent past and these artists have been making waves in the art world ever since.

Harlem-born artist Tschabalala Self  had her first UK solo exhibition at Parasol unit in 2017, followed by a solo show at Tramway, Glasgow. Since then she has presented in a stream of US institutional shows including Frye Art Museum, Seattle, Hammer Museum, LA, and MoMA PS1, New York. Her work recently got the attention of design house Louis Vuitton who invited her to design a bag for their new collection, ArtyCapucines.

Self plays inventively with figuration in her vibrant and dynamic paintings. She deconstructs and recreates the black female body using various techniques, including collage. Working on the floor of her studio she sews pieces of fabric directly onto a work. Sometimes the fabric is African inspired cloth given to her by her mother or even pieces of an earlier unresolved work. Self is mainly concerned with concept of the black female body in contemporary culture. She examines the merging of race, gender and sexuality through a variety of forms and narratives. Each fractured figure or character in her work asserts its own defined and powerful identity. By working with mixed-media in this way, Self manages to blend reality with imagination. This allows her to explore how the black female body functions as both a social and political symbol.

Rana Begum presented her first UK institutional exhibition at Parasol unit in the summer of 2016. Begum’s colourful and engaging sculptural installations certainly made an impact on our viewers and resulted in a record number of visitors to the foundation.

“I love the idea of blurring the boundaries between painting, sculpture, architecture and design”. Rana Begum explains in an interview with Elephant magazine. 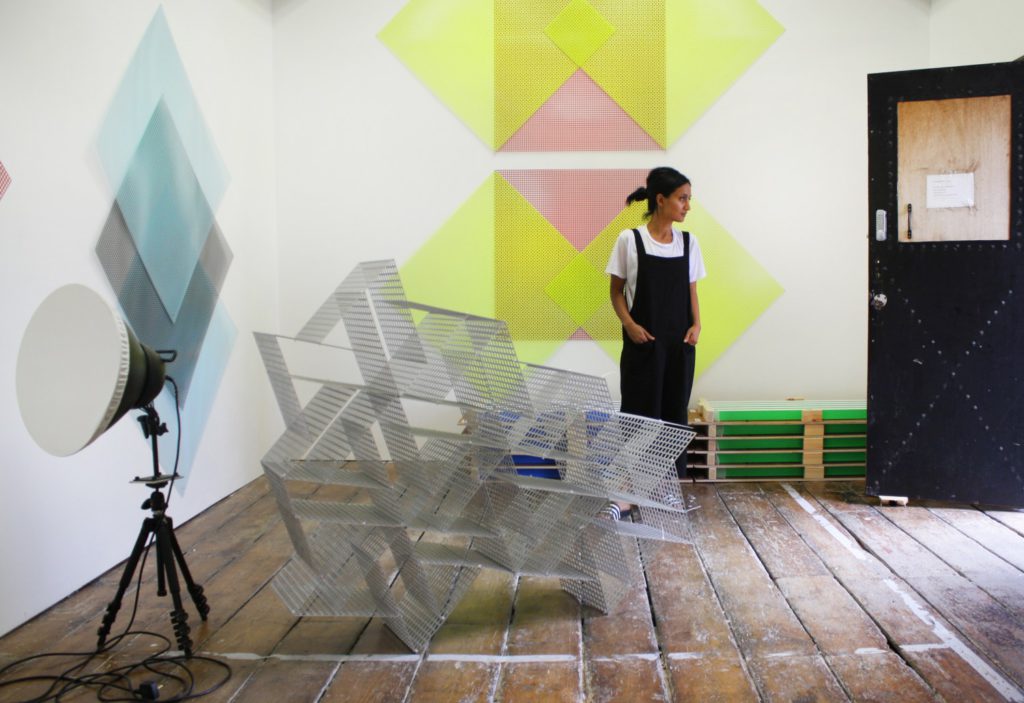 Rana Begum in her studio, credit Something Curated

Begum’s two- and three-dimensional works and installations draw on influences from Constructivism and Minimalism. However, the city environment is what fascinates her the most and has led art critic and curator Nick Hackworth to call her an ‘Urban Romantic’. Begum also finds inspiration in her childhood memories growing up in Bangladesh surrounded by geometric patterns of traditional Islamic art and architecture. Colour, material, movement and form have become a hallmark of her abstract sculptures and reliefs. But light is the activating element which shifts and changes, bringing an irresistibly engaging energy to her works.

Begum created a new large-scale installation No. 670, 2016, especially for her exhibition at Parasol unit in 2016.  Visitors were invited to walk through the massive maze-like structure made with sections of colourful industrial steel-mesh fencing. The immersive experience created the sense of infinity bound within the geometric repetition of its architectural arrangements.

In 2017, Begum curated the Arts Council collection at Yorkshire Sculpture Park and had a major solo exhibition at Sainsbury Centre for Visual Arts, Norwich. Following that, she has presented in Frieze Sculpture 2018, a solo presentation at Tate St. Ives, Cornwall, and participated in a group show at the recently renovated space at Kettle’s Yard in Cambridge. Earlier this year she took part in the group exhibition Is This Tomorrow? at Whitechapel Gallery, London.

We’re excited to see what’s in store for both of these artists as they continue to make waves in the art world!

Artists who have shown at Parasol unit

Rana Begum: The Space Between